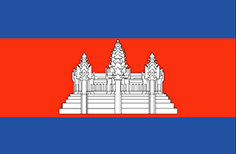 -
Secular holiday : Commemorates the fall of Pol Pot's Khmer Rouge in 1979 following an invasion by Vietnamese armes forces. not a paid holiday when falling on Saturday or Sunday

-
School holidays : School calendar provided by the Phnom-Penh International school
https://www.ispp.edu.kh
Calendar NOT published by the Ministry of Education http://www.moeys.gov.kh
In most of Cambodia, 20% of children ages 59 are employed; 47% of children ages 10-14; and 34% of ages 1517.
Only 45% can attend school [International Labour Organization]

-
Hinduism : Paid holiday when falling on Saturday or Sunday

-
Hinduism : At the end of the harvest season. Lasts 3 consecutive work days during which Cambodians douse each other liberally with water, clean and decorate their houses, and make offerings at the local temple. City streets are decorated and brightly lit in the evenings. not a paid holiday when falling on Saturday or Sunday

-
Secular holiday : The Royal Ploughing ceremony marks the beginning of the planting season. King of Meakh , a man, conducts the plough, and Queen Me Hour , a woman, who sows seeds. The sacred cows are led to trays containing rice, corn and other feeds. Their choice will affect predictions for the coming year. "Pithi Chrat Preah Neangkol"