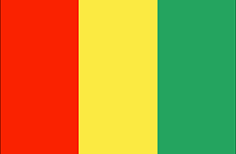 -
School holidays : Information provided by the lycée Albert Camus
www.lyceealbertcamus-conakry.net
Ministry of Education dates are not available
Schooling is Guinea mandatory till age 12
schools may open on Saturday
school uniforms not required

Anniversary of the Second Republic

-
Secular holiday : On 3 April 1984, colonel Lansana Conté led a coup without bloodshed which leads to the seizure of power by the army following the disappearance of Sékou Touré, the president of the first Republic.

-
Secular holiday : On the 25th of May 1963 the Organisation of African Unity was established at Addis Ababa in Ethiopia. Its purpose was to promote the unity and solidarity of African states, defend the sovereignty of all members, eradicate all forms of colonialism, promote international cooperation having due regard for the Charter of the United Nations and the Universal Declaration of Human Rights, coordinate and harmonise member states economic, diplomatic, educational, health, welfare, scientific and defence policies.