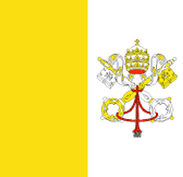 Anniversary of the beginning of the Pope's pontificate

-
Secular holiday : In tribute to the current Pope's Christian name