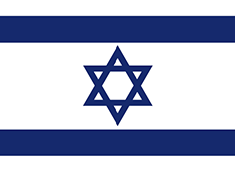 -
School holidays : Http://edu.gov.il
official calendar issued by the Ministry of Education
Separate calendar for Arab and Druze schools
PISA ranking (average 493): 467
While the average school year is 180 days, Israeli students are since 2017 in school for 227 days, making the number of school days one of the highest in the OECD
Schooling is mandatory till age 18
number of instructional hours per year in lower secondary education: 610
schools close on Saturday
school uniforms required
Technion-Israel Institute of Technology ranking: Times Higher Education #--/QS ranking #--/Shanghai #67

-
Jewish : Celebrates defeat of plot to destroy the Jews of Persia. In Shushan, the capital of Persia, King Ahasuerus married Esther, and made her his queen. He was not aware that she was Jewish. When Esther's cousin, Mordecai, bothered the king's prime minister, Haman, the prime minister became enraged and finally convinced the king that the Jews should all be put to death. After a three-day fast, Esther revealed to the king her identity as a Jew, and indulged him to save her people. The king spared the Jews, hung Haman, and made Mordecai his new sovereign. In israel, other businesses remain open

Banks are closed in Jerusalem

-
Culture : Yom HaAliyah pays homage to Aliyah  immigration to Israel  as a cornerstone of both Israels founding and its future. The law also makes international history with Israel becoming the first country in the world to dedicate a national holiday to honoring the contribution of immigrants.

-
Jewish : Passover; deliverance of the Jewish people from Egypt. The Seder service on the first two evenings recounts the story of the Exodus Paid holiday when falling on Saturday or Sunday

-
Jewish : Passover; deliverance of the Jewish people from Egypt. The Seder service on the first two evenings recounts the story of the Exodus

-
Culture : Traditionally dedicated to fallen soldiers, this commemoration has now been extended to civilian victims of armed disputes

-
Culture : Marks the hillula (celebration, interpreted by some as anniversary of death) of Rabbi Shimon bar Yochai, a Mishnaic sage and leading disciple of Rabbi Akiva in the 2nd century, and the day on which he revealed the deepest secrets of kabbalah in the form of the Zohar, a landmark text of Jewish mysticism Wikipedia

-
Culture : Israel marks this day on May 9th as, like Russia, it was early morning on May 9th 1945 when victory in Europe was declared.

-
Jewish : Celebration of Moses' descent from Mt Sinai with the ten commandments. Plants and flowers are used in decorations.