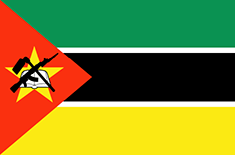 -
School holidays : Official calendar gazetted by the Ministry of Education
https://www.saseducacao.gov.mz/
Schooling is mandatory till age 12
50% of children do not attend school
Teaching language: Portuguese
schools close on Sunday
school uniforms may be required

We carry confirmed dates till Feb 2023

Please note that authorities may take last-minute decisions; please double-check if this information is vital to you
Make a Paypal donation of euros 50 to [email protected] to purchase the full calendar for 5 countries, including Mozambique schools
Contact [email protected] to purchase a file containing confirmed calendars of 550 countries and regions.

-
Secular holiday : Marks the assassination of Frelimo's leader Eduardo Mondlane in 1969. Paid holiday when falling on Saturday or Sunday